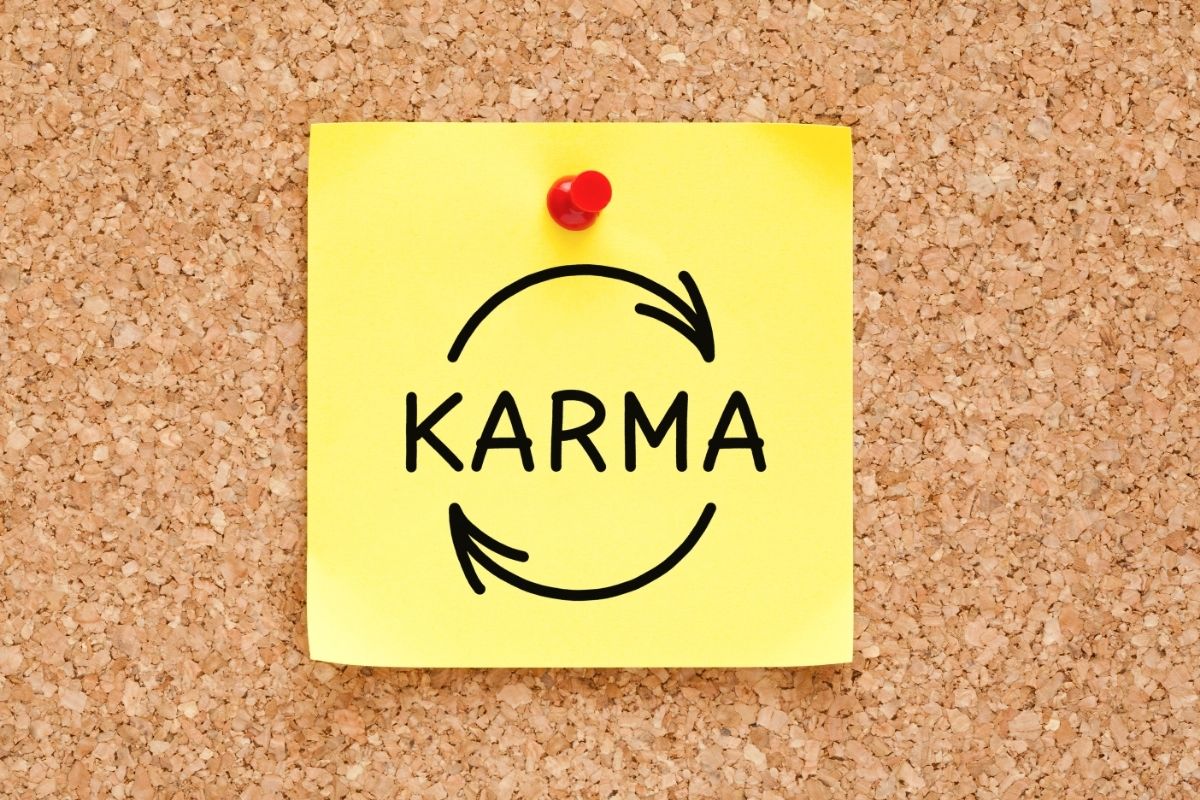 When someone who has done something immoral to somebody else experiences difficulties in their own life, people often call it Karma.

Contents show
1 Christianity And Karma
2 What The Bible Says About Karma
2.1 Karma And Job
2.2 Karma And Proverbs
2.3 Karma In Ezekiel
2.4 Karma In Matthew
2.5 Karma And Romans
2.6 Karma And Galatians
2.7 Karma And Titus
3 Final Thoughts

Karma is an important concept in Buddhism, Hinduism, and Jainism. At its core, Karma is the belief that your actions in this life (and previous lives) impact your fate in the future.

According to Karma, what you put out into the world returns to you. It is thought that one can accumulate bad Karma or good Karma through their actions.

While there are some verses in the Bible that seem to support the concept of Karma, Christians believing in Karma is a source of much controversy in the community.

The association of Karma with other religious beliefs means that many Christians find belief in Karma to be offensive to God.

In today’s article, we will be exploring what the Bible says about whether Christians should believe in Karma.

The Bible teaches that our actions have consequences. In fact, the Bible states that “the wages of sin is death” (Romans 6:23). This verse suggests that if we do not repent of our sins, then they will come back to affect us later in life.

Karma is also a theory based on the principle that there must be either reward or repercussions for our choices.

Based on this information, it might seem as though Christianity and Karma are fully compatible religious beliefs. However, many Christians object to the concept of Karma and provide Biblical evidence to support their views.

While many Buddhists believe that the good and bad Karma accumulated by a person will impact their next life, the Bible makes it clear that good actions alone are not the key to eternal life.

A person must also accept the Holy Spirit into their lives. But what else does the Bible say about Karma?

What The Bible Says About Karma

Job is an excellent book of the Bible to start with when discussing Christianity and Karma. Job 4:8 reads, ‘As I have seen, those who plow iniquity and sow trouble reap the same.’

This is an interesting message because it is very consistent with the concept of Karma – specifically, the idea of bad Karma coming to people who do bad things.

In Proverbs, we can also find some verses that could be interpreted as touching on the subject of Karma.

Proverbs 26:27, for example, says, ‘Whoever digs a pit will fall into it, and a stone will come back on him who starts it rolling.’

Again, the moral of this verse is very similar to the theory of Karma. It implies that what you create will come back to you in the end. Once again, however, it would be a mistake for Christians to interpret this as Karma because it is, instead, a manifestation of divine justice.

Followers of Jesus Christ might notice the similarity between this verse from Ezekiel and the law of Karma, which dictates that bad people will have their bad choices reflected back to them and good people will be rewarded.

Despite this, it is important for Christians to recognize this law as God’s will in order to give thanks.

Matthew 7:12 is another verse that could be interpreted as an indication that Christians should believe in Karma. It reads, ‘So whatever you wish that others would do to you, do also to them, for this is the Law and the Prophets.’

‘Treat others as you could want to be treated’ is the real message of this verse, but it can be linked to the concept of Karma, which suggests that the way you treat others will come back to you, making it important to consider how you would feel about an action being done to you before you do it.

However, this verse is prefaced by Matthew 7:11, which says, ‘If you then, who are evil, know how to give good gifts to your children, how much more will your Father who is in heaven give good things to those who ask him!’

This verse reminds us that being granted good fortune by God is not automatically determined by good actions. Having enough faith in God to ask for what you wish is a crucial part of receiving.

Romans is a chapter of the Bible where we have found several interesting verses related to Karma. Romans 12:19 cautions Christians, ‘Beloved, never avenge yourselves, but leave it to the wrath of God, for it is written, “Vengeance is mine, I will repay, says the Lord.”’

This verse reminds us that God will punish those who have committed evil acts according to His own plan.

While one takeaway is that bad deeds will be punished accordingly, which is consistent with the idea of Karma, Romans 12:19 makes it clear that this is the work of God.

In Galatians, we can find more evidence that events that might be interpreted as Karma are caused by God.

Consider Galatians 6:7, which reads, ‘Do not be deceived: God is not mocked, for whatever one sows, that will he also reap.’

The moral of this Bible verse is that bad deeds can’t be hidden from God, and that God will return their misdeeds to them in the form of punishment.

Finally, we come to the Book of Titus, which contains our last piece of Biblical evidence concerning Christianity and Karma.

Titus 3:5 clearly states, ‘He saved us, not because of works done by us in righteousness, but according to his own mercy, by the washing of regeneration and renewal of the Holy Spirit.’

This reaffirms that while God will reward good deeds and punish bad deeds, our salvation ultimately depends on our acceptance of the Holy Spirit.

This is not compatible with the concept of Karma and reinforces the fact that Christians should not live their lives according to the laws of Karma.

So, based on the Biblical evidence, should Christians believe in Karma? In short, probably not.

While the idea of Karma does, in some ways, align with the teachings of God as far as reaping what we sow and being judged according to our actions on Earth, it is ultimately our faith in Christ that determines whether we will receive eternal life and salvation at the time of divine judgment.

Therefore, it is better for Christians to view what many might call Karma as the power and judgment of God.

Noting similarities between aspects of Christianity and other major faiths fosters knowledge and empathy, but we should always remind ourselves that our future is in the hands of God. This is the position that is most compatible with the Christian faith.