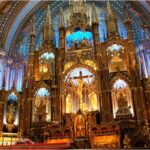 The issue of ownership and control of churches is a complex one, which has been the subject of much debate in recent years.

Contents show
1 Who Owns Churches – The Government Or The Church Itself?
2 Church Property Laws
3 The Supreme Court Church Ownership Case
4 Why Is It Difficult To Determine Church Property?
5 Final Thoughts

The issue has become more important as the number of independent congregations and denominations has increased, since it can be argued that these are not really ‘churches’ at all, but rather separate organizations with their own aims and objectives.

This article will provide an informational, factual overview of the issue, as well as some problems and debates that surround this topic.

Whether you are involved in a church, interested in property disputes, or just curious, this article will provide an overview of the issues surrounding this topic, including the legal position on church property rights and debates. Read on to learn more.

Who Owns Churches – The Government Or The Church Itself?

Generally, the answer to this question depends on where you live. In some nations, such as much of Europe, the government owns the majority of churches.

In other places, however, such as the United States, the government has no say over who owns churches, as a result of the First Amendment out of the constitution.

In the US, the ownership of churches varies greatly church by church, and is dependent on a number of factors, including elements like the traditions that have been established by the faith or denomination in the past, as well as the ecclesiology, and the more practical factors, such as the kind of real estate that the church is on, how it’s maintained, and by whom.

Some churches, typically the independent ones that are run by one congregation for themselves, hold title to their real estate, whereas other churches hold their title/property deed in trust (through the means of something like a property holding company) for the church’s exclusive use and benefit.

However, this is made a lot more complicated by the existence of multi-site churches – which are the same institution/establishment or denomination spread out over multiple locations.

Typically, the right to ownership over all of these locations is held by the ‘parent’ church (which is the oldest or largest location, and typically any admin or legal is organized here), or something such as a consolidated property holding company.

For denominational churches, property ownership can vary between each denomination – with different rules, standards, and de facto practices that are established by the church’s constitution.

As an example, we’re going to look at two similar churches, that have totally different ways of establishing ownership of church property.

The Presbyterian Church of America (abbreviated to PCA), has a legal process by which the title or deed to the real property is held exclusively by the local church or by a church-associated company.

Alternately, the Presbyterian Church, United States of America (abbreviated to PCUSA), has a totally different procedure to the PCA (and it is a bit more legally complicated!).

The deed to each local church property has to be held by a governing body of the Church (either regional or national), or can be held by the local church itself, subject to something called a trust clause, which is in the church’s constitutional document, such as the denomination’s Book of Church Order, or laid out by a contract.

Often, this kind of complicated legal ownership is the subject of legal disputes.

Under US law, local churches are typically listed as the property owner, meaning that the church themselves holds the title or the deed to the local church property.

However, most of the time, the legal battles that we see in the news are the result of the wider denominations claiming a right to determine the occupancy of the property, sometimes as a result of the existence of a trust clause in the denomination’s constitution.

This means that there is a wider question over who really owns a church building.

Recently, the decisions of courts in the United States when it comes to this question have generated a significant level of public concern, which has resulted in a number of congregations looking to review the status of their local church property.

Some churches now want to determine whether they have a viable claim to ownership of their own church property, rather than the denomination at large having a claim.

Many local churches are going to civil court, to obtain judgments that establish that they have full and unfettered ownership of their real estate.

In addition to civil court, a local church can also have issues over real estate ownership if it wants to change denominations, and they can be at risk of losing rights to use their venue or even be at risk of suffering a hostile takeover, by their old district denominational representatives.

Churches concerned about issues regarding ownership should contact a trusted lawyer or attorney, in case there is a church dispute.

The US Supreme Court has repeatedly tried to resist efforts to get it to clarify its position on church property ownership. In 1892, the Supreme Court ruled against the Free Methodist Church, in what became known as the “Free Methodists vs. Smith” case.

In 1947, the Supreme Court again ruled against the Free Methodists, in the case of Watson v. Jones.

In this case, the Supreme Court ruled that the Free Methodist Church did not have standing to sue the Episcopal Church for taking control of the property.

They said that the Free Methodists were not a party to the contract that gave them title to the property, so they could not bring suit.

This meant that the Russian Orthodox Church could not claim ownership of the property that it used to build the Saint Nicholas Cathedral in New York City.

This decision was based on the fact that the Church had signed an agreement with the city, giving up any future claims to the property.

These cases show that the Supreme Court does not like to rule on questions of church property ownership.

The most recent case, in 2018, was brought by a church that has previously owned its property, subject to a trust clause in the denominational constitution.

The denomination then laid its own claim to ownership of the property after the congregation has disassociated from the denomination.

Episcopal Churches in South Carolina hold property that was titled in the name of the local churches, even though the original deeds did not mention the trust clause.

Trial courts in South Carolina judged that the local churches owned the property, but on appeal, the South Carolina Supreme Court reversed the original ruling, and instead decided in favor of the national Episcopal church.

Why Is It Difficult To Determine Church Property?

There is a big issue when it comes to determining the ownership of church property in the US is how to apply the first amendment and the legal doctrine of neutral principles.

The First Amendment states: “Congress shall make no law respecting an establishment of religion, or prohibiting the free exercise thereof;”

This means that Congress (the federal government) cannot establish a religion, nor prohibit people from practicing their faith.

However, the First Amendment also says that the freedom of religion is protected. So if you are a member of a church, your right to practice your faith is protected.

But there is a catch. If you want to use the property of another person, you need permission.

You can’t just go into someone’s house (or, for example, the property of a denomination that your church used to use) and start using their property without asking them.

That would be trespassing. This is complicated even more by the fact that a church is allowed to weigh in on matters of the church that do not hinge on matters of wider theological questions.

Balancing the legal need to stay neutral on theology for all religions, separate denominations, or disputing factions of the same church, with the ability to weigh in on issues that affect churches on a more practical level, without having an effect or a preference for theology.

In conclusion, there are a lot of different answers to the question ‘who owns churches’ depending on a variety of factors.

Often, if a local church has split from the wider denomination, there can be disputes over ownership of the real estate.